The Chevron Company is a multinational energy corporation with headquarters in San Ramon, California. This company sells oil products in America more than 180 countries around the globe. The company takes efforts to ensure continuous growth and expand its market base. Chevron has shown a strong performance in the stock markets, which is due to its sound monetary policy that is based on the US and world inflation rates (Quin). It is necessary to note that the performance of the Chevron Company depends on the state of crude oil in international markets and performance of large oil producing economies. The World Bank estimates that the world economic growth will reach 3% from 2016 to 2018 (Quin). These projections are based on the increasing demand for oil in different parts of the world.

Monetary policies ensure that the economy growth and stability is protected. As a profit-oriented organization, Chevron has checked its monetary policies to ensure it is operating at a profit. However, last year, Chevron experienced a backslash in its cash flow. Thus, in the first nine months of 2016, the companys cash flow dropped to $8.9 billion compared to $14.9 billion in 2015 (Rey; Chevron Corporation). The company decided to alter its monetary policies to ensure consistent growth and stable growth rates in the coming years. Chevron slightly lowered the price of its products compared to its competitors to sell large volumes of products, hence generate more revenue. According to companys analysts, decreasing the price will increase customer share, and the company will sell more than its close competitors.

Unemployment rate implies the size of labor force with appropriate qualifications that is not engaged in employment. Private companies and the government create employment of the people. Chevron employs a more than 60,000 workers who serve in its outlets globally (Rey). Despite a high number of employees, the company enjoys a positive public repute for good pay check to its workers (Wall Street Journal). In addition, energy production companies need to take special cautions and precaution to protect their employees. The success of these companies depends on the effort they take to protect the employees. Chevron has done a lot for the well-being of its employees. Thus, the company has initiated on-sight health and fitness points in its production sites (Jobling and Jamasb 19). Additionally, it has established numerous health-based centers and services in the majority of its programs. Apart from that, Chevron has contributed to the reduction of the unemployment rate in the United States. However, the commitment to provide workers with a comfortable working environment and good paycheck has increased the companys capital expenditure. Therefore, the company plans to cut its labor force by at least 4,000 workers to reduce expenditures on salaries and wages (Wall Street Journal). Although this move will contribute to a higher unemployment rate, the company will reduce expenditures and use extra savings to pay its debts.

Comparative advantage is the ability to produce in large quantities at a lower price. Companies and business entities strive to establish a comparative advantage in their operations to ensure higher profits. Chevron enjoys a considerable market share in the United States and beyond, which gives the company a comparative advantage in the highly competitive oil and energy production industry (Quin). Today, Chevron has its market spread in six continents. It is the largest oil and gas producing company in the United States after Mobil Exxon. Chevron enjoys a continuous growth. As Graph 1 shows, the companys net production reached 4% in 2016 and is expected to increase in the future. Therefore, in the past few years, the company invested a lot in PP&E in different countries such as Australia, Nigeria and Angola. By expanding its market share, Chevron will lower the cost of production, thereby maximizing profits and overall returns from its investment. According to the company official website, the average cost of producing a barrel of oil is $44 (Chevron Corporation). A high-profit margin due to a low production cost will enable Chevron to expand its business and increase its capital revenue.

GDP, gross domestic product, is an economic parameter that is used to measure how healthy is the economy of a country. It is the total value of goods produced within a specific period. As a rapidly growing multinational company, Chevron has invested heavily in different oil and energy related projects in various parts of the world (Chevron Corporation). The company produces oil and energy products worth billions of dollars annually. Large GDP ensures that Chevron returns a maximum of its investments and does not operate at a loss. Chevron has also contributed significantly to the growth of the GPD of many countries. The companys income comprises a considerable part of the GDP of the United States. Additionally, Chevron has invested in numerous projects in Australia, such as Gorgon and Wheatstone that produced substantial revenue to the Australian GDP (Mohaddes and Pesaran 389). The Australian Central Bank expects Chevron to remain a key player in the growth of the Australian GDP because of its significant investment in the country. Moreover, Chevrons contribution to the worlds GDP is enormous. Other countries such as Angola and India have increased their GDP due to the contribution of Chevron.

Supply curve shift is a decrease in the supply of goods availed in the market for consumers by producers. Decrease in supply may occur when producers anticipate an increase in the price of goods and services they produce. They, therefore, hold products, waiting for the time to supply more and make substantial profits, causing a supply curve shift. Because of the fear that the price of oil and natural gas would increase in the future, Chevron supplied more in 2014 and 2015 and thus made higher profits compared to 2016.

Investment refers to a monetary asset that a company or an investor purchases to yield more income in the future. Chevron has made dollar investments such countries as Australia, Angola, and Nigeria. It has invested billion dollars in oil and energy products every year in these countries. The companys investment in PP&E in Angola and Nigeria alone is $2.5 billion. Moreover, since 2013, Chevron has been investing three billion dollars in gas and oil in Kazakhstan every year (Mohaddes and Pesaran 389). Today, the success of the company emanates from investments in Asian, American and African markets. Thus, Chevrons revenue from Asia equaled 50%; from the USA – 20%; Australia – 10%; other countries of America – 10%, and from Africa – 5%. Chevron has the strongest balance sheet compared to its competitors (Luitel). It is predicted that its earnings would further increase because of the growing demand for oil in different parts of the world. Also, according to IEA, the global demand for the LNG Gas will increase by at least 2% each year up to 2018. This demand will be particularly high in China (Mohaddes and Pesaran 386). Therefore, the Chevron Company aims to boost its investment in India and China. Reports by CNN Money show that the aggregate demand for oil in China and India is projected to increase in the future. Graph 2 below shows the oil demand projections in China. According to the graph, oil demand in China will reach a daily demand of 12.7 million barrels of oil by 2020. 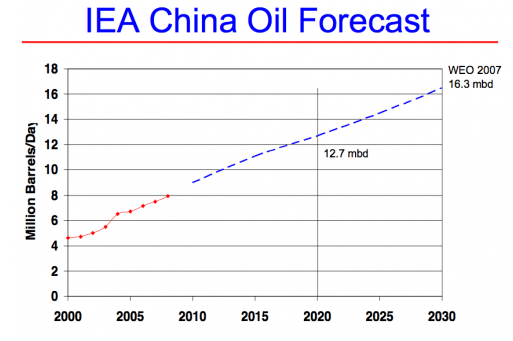 In conclusion, it is apparent that the demand for oil will continue to grow, which presents a better outlook for the Chevron Company. The projections from the World Bank anticipate expansion of the natural gas industry by more than 20%. Increased demand for oil will ensure the companys strong performance in this profitable area in the future. Japan and China are anticipated to become large consumers of natural gas. Moreover, the demand for natural gas in Australia is expected to increase by 23%. The economic prospects for the company highlight that an increase in demand will be essential for expansion of the companys profit margin. As a result, Chevrons growth is projected to improve positively in the future.

You order custom
writing service
We provide profound
research
Professional writers
develop your paper
We send the paper
to your e-mail
We check the paper
on plagiarism
We upload into your
account at our site
and get
15% Discount
Financial Statements of Linamar Corporation
Analysis of the Connection between Clarissa Dalloway and Septimus Warren Smith in Virginia Woolfs “Mrs. Dalloway”