Establishment of the British Mandate in Palestine

Before the First World War, Palestine had been under the control of the Ottoman Empire for almost 400 years. However, during the war, the British army invaded Palestine from the south, defeated the Turks, and occupied the country. The Jewish Legion, formed within the British army on the initiative of Jewish leaders Ze’ev Jabotinsky and Yosef Trumpeldor, played an important role in the British success since it helped the British army in the conquest of Palestine during the conflict with the Ottoman Empire. Thus, the British Foreign Secretary Arthur Balfour issued a document, later named the Balfour Declaration, to award Jews for their support. The Declaration remarked that British authorities “view with favor the establishment in Palestine of a national home for the Jewish people.” However, the similar agreement was reached between the British High Commissioner Sir Henry McMahon and Sharif Hussein bin Ali. British authorities promised to support the Palestinian Arabs independence in the case they revolted against the Ottoman regime. Thus, the agreement caused a significant conflict for the same land between Arabs and Jews after Britain had received the right to govern the region.

In April 1920, a post-World War I meeting of the Allied Supreme Council was held at the conference in San Remo. During this conference, a rather important agreement was reached to remove the “Arab provinces from Ottoman authority and apportion them between Britain and France.” The mandate for the administration of Palestine and Iraq was issued to the United Kingdom, and France was assigned to govern Syria and Lebanon. Thus, both countries became official administrators and mentors of these states. The UK was charged with the implementation of the Balfour Declaration on the establishment of the Jewish National Home. The British Mandate in Palestine lasted from 1922 until May 1948. Under the Mandate, Britain controlled the territory of modern Israel, Jordan, the Gaza Strip, Judea and Samaria.

The British authorities did not plan either the creation of the independent Jewish State or even the Jewish majority in Palestine. Already in 1921-1922, the British officials stated that they understood the Jewish National Home as nothing more than a self-governing community. Thus, the development of the Jewish National Home was regulated by the provisions of Winston Churchill’s White Paper of 1922. In 1921, British administration decided to divide the Palestine into two parts (see Figure 1). Consequently, the emirate of Trans-Jordan (Arab Palestine) was formed on the territory to the east of the Jordan River (approximately 77% of the total area). The emirate was under the administrative control of Great Britain until 1946. Then, it gained independence, and the sovereign state Jordan was proclaimed. In violation of the San Remo agreement, the Jews were not allowed to settle in the Trans-Jordan territory. The second part was Jewish Palestine (23% of the total territory). It experienced several waves of Jews immigration as they believed that the territory of Palestine was their authentic homeland. In the 1930s, the rise of Nazi ideology in Germany caused the Fifth Aliyah, which was a rush of a quarter of a million Jewish refugees, fleeing from Nazi oppressions. This influx finished after the Arab uprising of 1936-1939 and the publication of the White Paper by Britain in 1939. The growing immigration of Jews to Palestine led to the rising Arab nationalism and the deteriorating relations between Arabs and Jews. In addition, for nationalistic reasons, Jewish small entrepreneurs generally did not want to cooperate with Arabs, preferring to hire Jewish immigrants instead.

During these immigration waves, the Jewish population increased to more than 600,000 citizens in 1946. Thus, the British authorities started to look for the solution to minimize the Jewish immigration. White Paper, completed by the British colonial minister Malcolm MacDonald. was published on May 7, 1939 after the failure of the St. James Conference regarding the future fate of the Palestine mandate. This document remarked that “the objective of His Majesty’s Government is the establishment within ten years of an independent Palestine state” , in which Arabs and Jews were forced to share the governance of one common state. Therefore, the British administration decided to strictly limit the number of Jewish immigrants up to 75,000 for the next five years, as according to the plan, the Jewish population should not be more than one-third of the population of Palestine. At the same time, after the period of five years, the entry of Jews into the country would be forbidden until the moment the Arabs of Palestine allowed it again. Moreover, it was forbidden to purchase the land for Jews. However, Arab immigration was not limited, and they had rights to buy the lands. 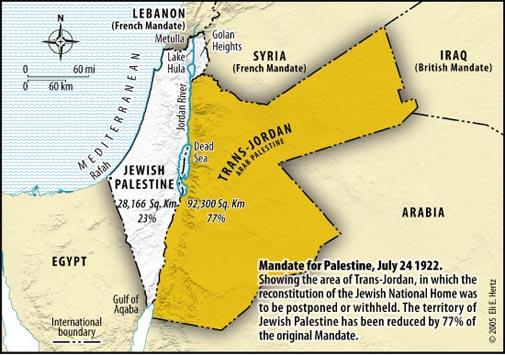 The British Administration in Palestine

Under the British administration, Palestine became a valuable political unit and lost the role of the marginal province of the Ottoman Empire. The British tried to form civil society and improve the infrastructure of the region. Thus, they built new communications, roads, airfields, established new legal institutions and police offices, and many others. Furthermore, they provided autonomy and freedoms for the religious communities despite their beliefs. Moreover, the Jewish and Arab communities received the right to organize and run internal affairs as well as open educational and cultural institutions. For example, the Jewish community (the Yishuv) participated in various social, political, and cultural activities. At the same time, the Knesset Israel (the Jewish parliament) was established, with the equal rights for both men and women. The parliament controlled the tax collection and organization of different cultural, educational, religious, and social affairs within the Jewish sector. Due to their well-organized and productive work, Jews founded a number of plants and achieved fertile agriculture on the unproductive and arid Palestinian land. Furthermore, Jews used Hebrew as an official language, established their own press in Hebrew, and opened the Hebrew University in 1925. Furthermore, Arabs had a number of benefits from the economic growth of the region.

For example, while Jews constituted only 15% of the total Palestinian population, they made nearly 45% of the total tax revenues. The largest part of the collected taxes was spent on the development of the Palestinian part, where mainly Arabs lived. However, the British Mandate did not succeed in one of its main goals to maintain control and to build a friendly atmosphere between Jews and Arabs. The unclearness in the territorial division and constant conflicts between Arab and Jews led to the numerous armed conflicts and violence. This violence became more and more aggressive, thus leading to hundreds of deaths from both sides. In general, the focal point of these conflicts was Jerusalem, as it was a very significant place for Jews and Arabs. For example, the first Arab Riots against the Jewish population were held in 1920-21. Thus, Arabs attacked Jews in Jerusalem, the port city of Jaffa, and in other parts of the country. During the week of the violence, 47 Jews were killed and approximately 150 were injured.

The End of the British Mandate in Palestine

In 1947, the British government announced its intention to end the mandate for Palestine, arguing that it was difficult to find a solution that would be acceptable for both Arabs and Jews and to stop the conflicts in the region. Thus, the United Nations, which was established shortly before the Second Session of its General Assembly on November 29, 1947, adopted a plan that presupposed the partition of Palestine (UN General Assembly Resolution #181). According to this Resolution, Britain was recommended to withdraw its forces from the independent Arab and Jewish States. At the same time, Jerusalem was given a Special International Regime and was controlled by the UN in order to prevent conflicts over its status. The majority of the Jewish population appreciated the proposed plan for the partition of Palestine, while the Arab Palestinians rejected this proposal due to the unequal geographical distribution of Jews and Arabs. Thus, when the British army left the country, a new military conflict between the newly established state of Israel and its Arab neighbors began. It was a War of Independence for Jews and Nakba (Catastrophe) for Arabs.

Finally, it would be necessary to remark that despite the fact that the British administration lasted approximately 30 years, the influence of this period was crucial, as it had influenced the history of the region and the entire world community. Moreover, thanks to the desire to have an independent state of their own, Jews had managed to establish their own country of Israel after fighting for it for many years with their Arabian neighbors. The interpretation of these events in academic sources is different, depending on the political position and views of the person who examines this historical period. However, people should make the analysis and evaluation of the period of the British Mandate in Palestine and learn the lesson from the historical past, as only this way can lead to a peaceful and happy common living of nations and a prosperous global future.

and get
15% Discount
Analysis of the Connection between Clarissa Dalloway and Septimus Warren Smith in Virginia Woolfs “Mrs. Dalloway”
Should Government Tax The Sugary Drinks Or Not