Since the ancient Ryman times until the 19th century, cassone, also known as marriage chest, played a considerable role in the marriage ritual by reflecting power and wealth of brideВ’s family. Great artists painted cassoni by using different images showing myths as well as historical and religious events. This essay describes the history and evolution, presents and analyses numerous examples of cassoni.

Cassone is widely known as a marriage casket or chest. It is notable that this furniture served not only as a box for storage of clothing, books, and household goods, but also was one of the main features of the whole interior of the house. Paintings, wood and steel engravings of the Renaissance style provided the description of peopleВ’s life, their beliefs and visions, their culture and lifestyle.

During ancient times, the wedding was some kind of agreement between two families, which made them stronger and wealthier. Often, young people married without love (Bayer). Therefore, wedding rituals and all their attributes reflect the social power and wealth, but not feelings. Ancient Romans were the first people who used cassone, which served as a brideВ’s case, where she could put her things and bring them to the future husbandВ’s house. Thus, no one could see what objects lay in this marriage casket. Usually, cassoni were ordered for about six month before the betrothal procedure because their construction and painting took much time. It should be mentioned that cassoni were made in pairs. As it is mentioned in The Italian Renaissance Cassone A Microcosm of Style, В“artisans designed pairs to be displayed next to each other in rooms, so that any pictured on them could be viewed in the correct sceneВ” (The Cassone). On the day of rings exchange В“the two cassone were joined together in the same way the two people in the couple dance painted on them are joinedВ” (Rutledge 38). The bride together with her cassone moved from her house to the house of her groom (situated either in the same town or in another one). Cassoni were shown to the public during the betrothal procession. Richly painted marriage cases reflected the familyВ’s power and even В“echoed the military triumphs of ancient RomeВ” (The Cassone). In addition, it should be mentioned, В“the joining of the two cassoni within the ritual also mimics in furniture the union of the bride and groom in ring exchange in the ritualВ” (Rutledge 54).

In course of time, cassoni became one of the most significant symbols of bride and groomВ’s wealth. The richer the family was В– the more decorated was brideВ’s cassone. Poor families could not afford a decorated marriage casket. Therefore, the exterior decorations were of paramount importance. It is notable that one bride could have several cassoni when she entered the groomВ’s house. Originally, a brideВ’s family was responsible for making and filling of cassone. BrideВ’s father commissioned and accompanied it during his daughterВ’s route from the fatherВ’s house (Bayer). However, this tradition was changed in the middle of the 15th century and the above-mentioned responsibility was passed to the groomВ’s family. The adaptation of Florentine sumptuary law restricting the pomp of wedding processions facilitated these changes (Cenadi). As it is mentioned in the article Renaissance Wedding Gifts, from 1475 cassoni were put in the nuptial chamber during betrothal procession (Renaissance Wedding Gifts), therefore, no one could see it.

Artists decorated cassoni with paintings, Intarsia (inlaid wood), wood engravings, Pastiglia (reliefs of very fine gesso), iron and bronze carvings, or a combination of all these types (Cenadi). Usually, a case of cassone was made from pines and walnuts. The length varied from 130 to 175.8 cm; the breadth varied from 38 to 43 cm. However, some of cassoni were enormously big. So-called Adimari Panel (see Fig. 1) has a length of 303 cm and breadth of 88.5 cm (Arts, Tuscany 1).

The Figure 1 depicts the wedding ceremony of Boccaccio Adimari and Lisa Ricasolo, which took place in summer of 1420 (The Cassone). It is the painting of Giovanni di Ser Giovanni known under the pseudonym Lo Scheggia (The Cassone). People in the central part are dancing a В“basse-danseВ”. В“Great attention is used to define the Florentine long garments, showing careful refined needlework of local craftsmen, intertwined silver and golden threads in stunning brocade patternsВ” (Cassone Adimari). In the backwards, the Baptistry of Florence is shown. Furthermore, Lo Scheggia showed young servants with baskets on their head and musicians, who were played trumpets. This cassone provides the vision of wedding ceremony in Florence in the middle of the 15th century.

Usually, decorations were made on the front of the marriage casket and its two ends. The decoration of the back of cassone was not very popular because it was seen only during betrothal procession moving from the brideВ’s to the groomВ’s house. It is notable that paintings or just a written list of brideВ’s inventory decorated the inner part of the lid. The bride put anything into her cassone, including clothes, books, jewellery, embroidered linens, decorations, toiletries, materials, etc. (Cenadi). In the article Italian Hope Chests – The Cassone the description of the appearance of cassone is given, В“the cassone…was dressed with a flat cover of brocade or velvet or with a thin long cushionВ” (Cenadi). Cassoni performed three main functions. They served as a piece of furniture, a part of a great ceremony, and a means of visual inspiration of the owners and their guests (or a decoration of a room). This marriage casket was a rather precious part of the household interior. In the article Renaissance Wedding Gifts, it is noted that flat lid cassoni were used in homes for different purposes В– as benches and low tables (Renaissance Wedding Gifts). Cassoni with flat lids were used as benches or placed alongside the bed as a low table. Often, cassoni were placed in the bedrooms on the foot of the bed or in a corner of a room.

Marriage caskets were decorated from the outer and inner sides with different pictures reflecting mythological stories, everyday activities, religious themes, etc. Different episodes of common life and from the Bible or even historical events were shown on the cassone (Baskins). The oldest cassone contained the paintings of the characters and lives of such notable personalities of ancient history as В“Penthesilea, Hippolyta and Emilia; Dido, the warrior Camilla, the Sabine Women, Lucrezia of Rome and VerginiaВ” (Cenadi). Different allegories and historical subjects were painted on a great number of cassoni. Some stories were scandalous; others reflected the conflict between love and duty.

It is notable that the exterior of marriage casket also changed due to the transformation of styles. During 1440th, its appearance had less Gothic features and more Renaissance ones (Cenadi). It should be mentioned that cassoni made in different parts of Europe differ greatly by their styles and paintings. In the article Art in Tuscany, it is noted that cassoni В“are possibly best-known classification of furniture whose distribution is limited to a particular regionВ” (The Cassone). On the one hand, they represent a mixture of traditional visions of the past and local contemporary styles. For instance, cassone made in Verona has paintings with mythological tendencies. Artists who painted cassoni in Florence preferred ancient sculpture motives. Cassone from Milan differs greatly by В“favored high-relief free-flowing foliageВ” (Cenadi). Cassoni in Venice and Sardinia have the geometrical design of their inner part.

You may also read here how to write art history research paper outline or order any essay below:

The artistic perceptions changed at the beginning of the 16th century. The ornament of cassone became lower-relief classical. The shape of the casket also was changed and obtained the following features: В“raised lids and bulbous bases often with lionВ’s paws for feetВ” (Cenadi).

Such famous Renaissance artists as Paolo Uccello, Pinturicchio, Filippino Lippi, Masaccio and his brother Scheggia, Donatello, Benozzo Gozzoli, and Sandro Botticelli painted cassoni (Cenadi). Different methodologies of painting of cassoni were described in works of Cennini. In addition, Vasari described the marriage casket in his work The Lives of the Most Excellent Italian Painters, Sculptors, and Architects (Cenadi). Moreover, descriptions and allusions of cassone can be found in works of Leon Battista Alberti (in Libri Della Famiglia), Giovanni Boccaccio (in The Decameron), and in paintings of Giovanni di Francesco Toscani (Watson).

One of the most notable artists who painted cassoni was Sandro Botticelli. One of his most notable works, Mars and Venus, was finished in 1483 (see Fig. 2). Nowadays, people have an opportunity to enjoy the contemplation of this work in National Gallery in London (the United Kingdom).

Figure 2 presents an image of the front part of cassone made for the wedding ceremony of Vespucci family. The main subject of this painting combines philosophical and psychological motives. A bride was associated with Venus. A groom was depicted as Mars. Venus reflects such feelings as harmony and love while Mars is characterized by disorder and war. Harmony, love, disorder, and war represent different sides of human nature. Sandro Botticelli in the painting combined all these sides. The union of Venus and Mars reflects the balance of all sides of human nature. In the background, small satyrs took MarsВ’s weapon and play with it. Venus contemplates Mars, who fell asleep. В“The patches of light on his face makes his sleep even deeperВ” (The Cassone). This artistic device was very innovative for Florence at the beginning of the 15th century. The body of a bride is covered by a dress from light material, emphasizing her youth and beauty. 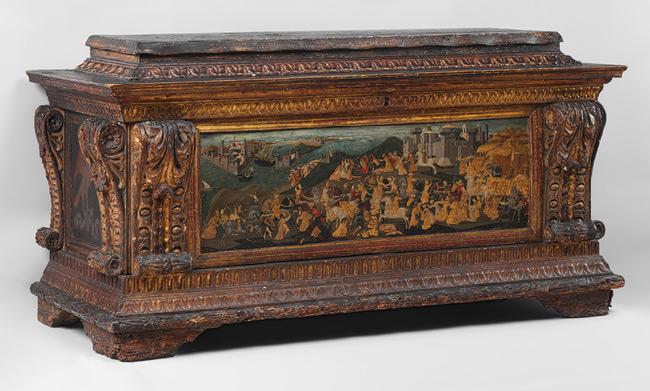 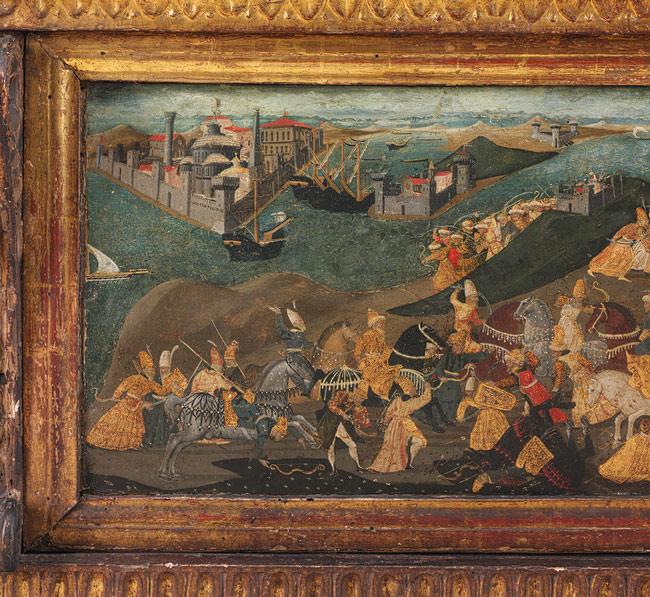 Fig. 4. Apollonio di Giovanni di Tomaso. Conquest of Trebizond. The left part of the front side. 1408. The Metropolitan Museum of Art. Web. 3 May. 2015.  Digital Image. 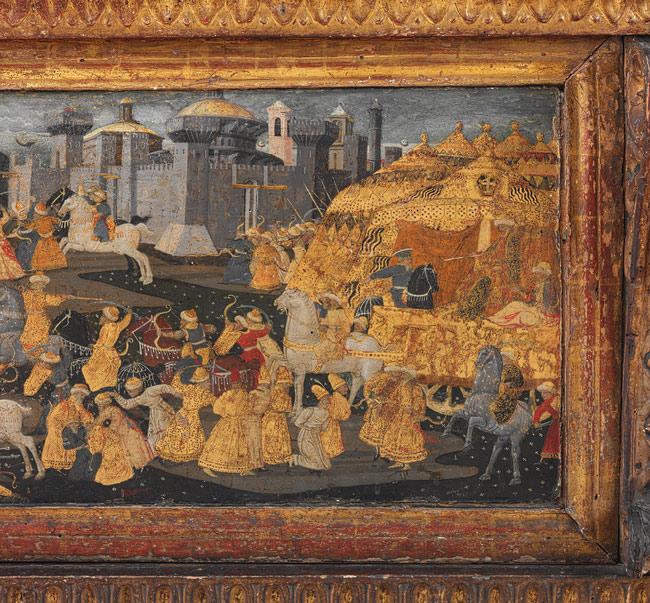 Fig. 5. Apollonio di Giovanni di Tomaso. Conquest of Trebizond. The right part of the front side. 1408. The Metropolitan Museum of Art. Web. 3 May. 2015. Digital Image. 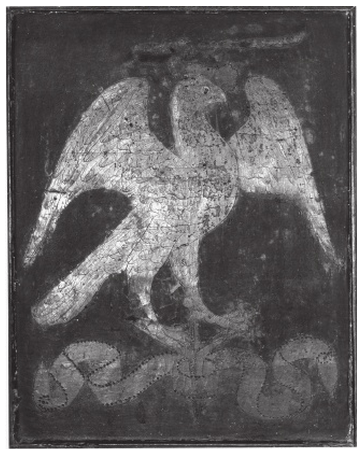 This cassone was made in the workshop of Apollonio di Giovanni di Tomaso in Florence in 1408 (The Collection Online). This brideВ’s case was made from wood, gold, and silver. The expensive luxury elements show the power and the wealth of a family. This cassone was made for birthrate celebration of the Strozzi family. On the sides of the cassone, family emblems are drawn. On the front side, one can see the battle and the conquest of Trebizond. The left part of the front side shows the Constantinople В– a great seaport in the Black Sea. On the right part of the front side, one can see Pera. Trebizond is located on the horizon to the right. This cassone shows the battle between soldiers in janissary caps (gold, white, and red) and soldiers in turbans (gold and white). On the right side, a person can see a man in dark blue clothes seating on the horseback. Nowadays, this cassone can be found in the Metropolitan Museum in New York (the USA).

At the end of 17th В– the beginning of 18th centuries the cassone lost its importance and popularity. Marriage casket became less decorated and seldom used. In the 19th century, people took to pieces their cassoni and sold off by separate parts. Nowadays, cassone has become a part of interior passed from generation to generation. Some of the examples can be found in galleries and museums all over the world.

In conclusion, cassone was not just a place where people put their clothes, jewellery, and books. This piece of furniture played one of the central roles in marriage rituals by reflecting wealth and power of groomВ’s and brideВ’s families. Numerous great artists painted marriage cases. Cassoni also was one of the most decorated pieces of furniture in houses. Paintings on cassoni reflect the life and vision of people and the evolution of art in Europe.